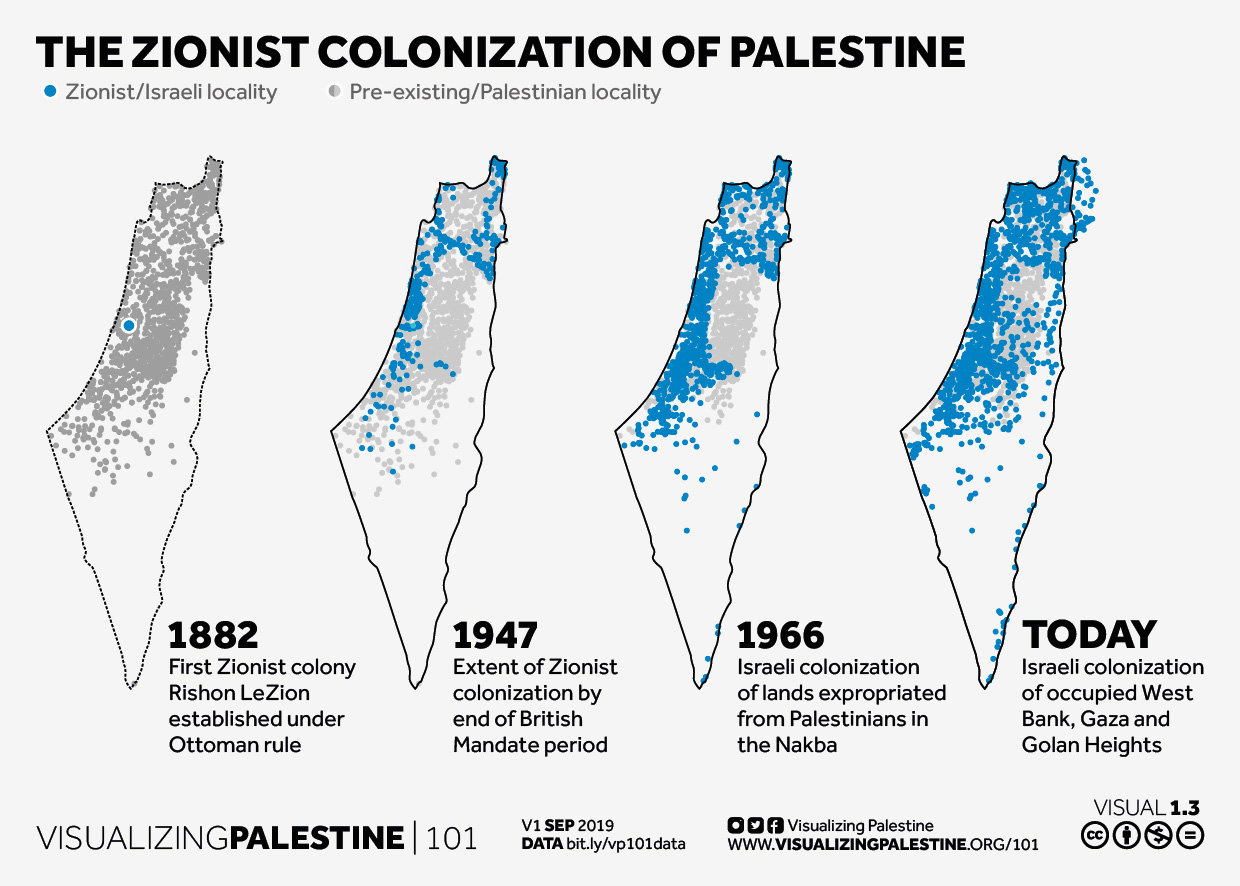 1897: First Zionist Congress calls for a home in Palestine for Jews. Founder of Zionist socialism, Nahman Syrkin, claims that Palestine “must be evacuated for the Jews” Creation of World Zionist Association (WZO) and the petitioning for “a home for the Jewish people in Palestine”

1901: Jewish National Fund (JNF) set up to acquire land in Palestine for the WZO, only to be worked and used by Jews

1918: Palestine occupied by Allies under Allenby, ruled through military administration

1931: Irgun (IZL) founded to support more terrorizing by the zionists of the Palestinian population.

1936 (-39’): April: Great Revolt begins against zionist colonization of Palestine and british Colonial rule. It would take the british three years to suppress the revolt, with significant support from the zionists.

1937: Peel commission recommends partition of Palestine, with 33% of the country to become a Jewish state. Part of the Palestinian population to be transferred from this state. British dissolve all Palestinian political organizations, deport five leaders, establish military courts against rebellion by Palestinians

1939: Ze’ev Jabotinsky, one of the prominent zionist leaders, writes: “…the Arabs must make room for the Jews in eretz israel.” British House of Commons votes in approval of a White Paper which plans conditional independence of Palestine after 10 years, and the immigration of 15,000 Jews into Palestine each year for the next 5 years

1947: November 29: UN adopts resolution 181 on partition of Palestine. Systematic expulsion of Palestinians by zionists is sped up, and fully executed through Plan A,B,C, and D

March 10th, 1948: Plan (D) Dalet, the zionist blueprint for the cleansing of Palestine is finalised. 18th: President Harry Truman pledges support to the Zionist colonial mission. April, 4th: Plan Dalet is launched by the Hagana. Villages along Tel Aviv-Jerusalem road colonized and residents expelled. 9th: Massacre of Deir Yassin, upward of 107 Palestinians were massacred by zionist forces. May, 3rd: Between 175,000 and 250,000 Palestinians have been forced from their homes.14th: Israel declares independence as British mandate ends, no defined borders, and no constitution. 15th: Day of the Nakba (Catastrophe). October, 29-31: Thousands of Palestinians are expelled during operation Hiram, villages colonized and destroyed.

1949: IDF begins to expel villagers from settlements inside the Lebanese borders. During the year 1949 armistice was signed between Israel and Egypt, Lebanon, Jordan, Syria. Meanwhile the Israeli army continued operating for the erasure and ethnic cleansing of over 750,000 Palestinians

1950: Migration and settling of land for Jews from Arab countries begins en masse

July 5-10, 1967: The Naksa, whereby Israel expanded its colonization of land to include the West Bank and Gaza strip, and the Golan Heights. November, 22nd: Resolution 242: calls on Israel to withdraw from all occupied territories. Israel begins settling West Bank and Gaza

October 6, 1973: The October war: Israel occupies part of Egypt and retains control of the Golan Heights. 22nd October.UN Security Council Resolution 338 reaffirms the rights of Palestinians to self determination and national independence

June 1982: Israel invades Lebanon in attempt to destroy the Palestinian Liberation Organization. September 16-18: Sabra and Shatila massacre where an upward of 3,500 Palestinians and Lebanese Shiites were massacred by a phalangist militia in the Sabra neighborhood and the adjacent Shatila refugee camp. The militia was closely associated with the Kataeb Party, and was actively allied, supported and trained by the Israeli IDF forces.

October 30th, 1991 – November 1, 1991: US convened international conference on Palestine in Madrid. Beginning the process that led to the Oslo Accords, and what the late Professor Edward Said has called “an instrument of Palestinian surrender, a Palestinian Versailles”

September 13th, 1993: The PLO and Israel sign the Oslo Declaration of Principles in White the House

1994: The Palestinian National Authority is formed, and Yasser Arafat, the PLO chairman, arrives in the occupied territories to become the president of the PNA

September 28th, 1995: Oslo II is signed (interim agreement for Palestinian control of parts of the West Bank and Gaza strip)

May 26,1996: Likud party returns to power and the first Benjamin Netanyahu government is formed

March, 2018: Great March of Return begins, weekly protests held against israeli settler occupation, and imposed siege on Gaza. The weekly protests continued on for a year.

November 18th, 2019: The United States declare the Israeli settlements as not illegal under international law

Learning Resources for Critical Ethnic and Indigenous Studies (abbreviated “Critical Learning Resources”) is a collaborative pedagogy project on racial capitalism and settler colonialisms. Located at the intersections of critical indigenous studies, race and ethnic studies, postcolonial studies, and feminist and queer studies, this project aspires to support transdisciplinary learning and linkages among the natural and social sciences, humanities, and the arts.